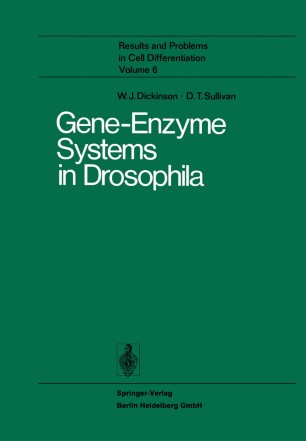 Part of the Results and Problems in Cell Differentiation book series (RESULTS, volume 6)

There was a period in the history of modern biology when proteins were thought to be "gene products" in a rather direct sense. An account of their appearance and disappearance in the course of development and differentiation thus seemed an appropriate means of describing "gene regulation". When RNA was found to be the immediate product of genetic activity, the study of proteins as gene products lost some of its original attraction. Indeed, the development of the powerful method of nucleic acid hybridization aroused the hope that a large array of specific messenger-RNA molecules synthesized during cell differentiation could be individually assayed. The difficulties in the way of such ambitious projects were described in Volume 3 of this series: Nucleic Acid Hybridization in the Study of Cell Differentiation (ed. H. URSPRUNG, 1972). Enzymes are in large measure responsible for cell function. Clearly, their synthesis must be under genetic control. We are convinced that the study of enzyme behavior during development merits much attention, particularly if the work is carried out on a eukaryote that lends itself to genetic and developmental analysis. An impressive amount of genetic information is available on the insect Drosophila, and much has been learnt about its development. The giant chromosomes present in several tissues of this insect might well be useful in a continuing analysis of the appearance of specific enzymes and the transcription of the cognate genetic loci.