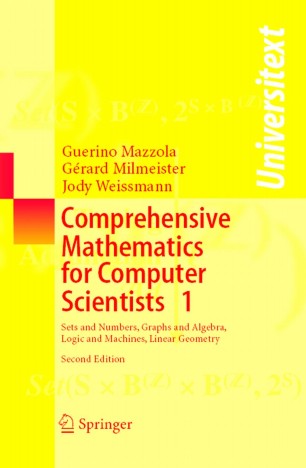 For the second edition the entire text has been carefully reread, and many examples have been added, as well as illustrations and explications to statements and proofs which were exposed in a too shorthand style. This makes the book more comfortable for instructors as well as for students to handle.

"The solution proposed by the authors of this book consists essentially of a course on the foundations of mathematics and computer science. … As one can see … the book covers a lot of material. … One of the good things about the book is that it covers a lot of ground in an extremely systematic way. … the book is written with conviction, and one can see that the authors made a great effort to make it interesting to their readers." (S. C. Coutinho, The Mathematical Gazette, Vol. 90 (517), 2006)

"This book meets the needs of a sound mathematical education of computer scientists improving formal competence and flexibility. It very well sets forth (and proves) the essential core theory and theorist or executive on all levels of Computer Science and IT industry will appreciate. … Having passed through all … the student will have a broad and sufficiently deep mathematical knowledge." (H. Mitsch, Monatshefte für Mathematik, Vol. 145 (2), 2005)

"As the title of this book suggests, it covers a broad range of topics in mathematics; it is intended for use as an introductory textbook for computer science undergraduates. … It may be suitable for people who are already familiar with the subject and need a reference to quickly check definitions and theorems." (I-Lun Tseng, ACM Computing Reviews, Vol. 49 (4), April, 2008)