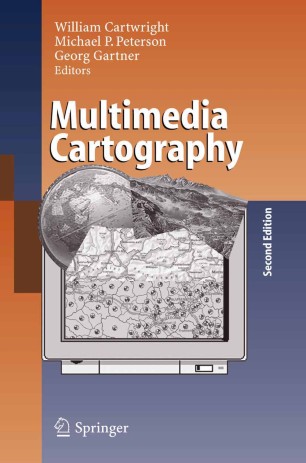 The explosion of interactive multimedia products on  the Internet, via the World Wide Web, has generated an immense interest in these products. The approach to producing interactive multimedia mapping products is quite unique and there has been an upsurge of interest in developing methodologies that best exploit both the technology and communication effectiveness of multimedia mapping. The various sections of this book cover the theoretical backgrounds, applications and future developments of Multimedia Cartography.
This second edition of Multimedia Cartography includes updated applications areas that are Internet-focussed. Since the release of Edition 1 in 1999 the focus of the delivery of Multimedia Cartography applications now includes the World Wide Web and mobile services, as well as discrete media. New chapters in the book reflect this.
As well, the book includes additional chapters on 3D applications and Virtual Reality applications.

William Cartwright is Professor of Cartography and Geographical Visualization at RMIT University, Melbourne, Australia, where he specializes in the application of New Media technologies to Cartography. He joined the University after spending a number of years in both the government and private sectors of the mapping industry. He holds undergraduate qualifications in Cartography and graduate qualifications in education, media studies, information and communication technology education and graphic design. He is Vice-President of the International Cartographic Association.

Michael P. Peterson is a Professor in the Department of Geography/Geology at the University of Nebraska at Omaha. He received his B.A. from the University of Wisconsin-River Falls, his M.A. from Boston University and Ph.D. from the State University of New York-Buffalo (1982). He has served as Visiting Professor at Universities in USA, Canada, Germany and Austria. He is past-President of the North American Cartographic Information Society (NACIS). He is currently chair of the Maps and the Internet Commission of the International Cartographic Association.

Georg Gartner is a Professor of Cartography at the Vienna University of Technology. He received his Mag. from the University of Vienna and his Dr. and Habilitation from the Vienna University of Technology. He received a Fulbright Grant to the USA and was a research fellow in Australia and Canada. He currently serves as a vice-chair of the Maps and Internet Commission of the International Cartographic Association and as Editor of the Journal on LBS.