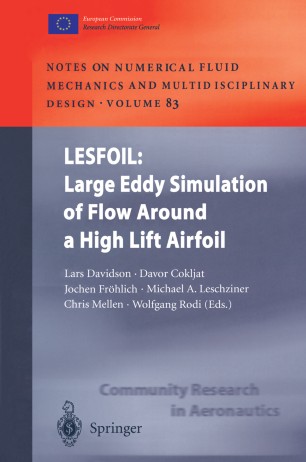 This volume contains results of a European project on Large Eddy Simulation (LES) of the flow around an airfoil. The main objective of the LESFOIL project was to assess the suitability of LES for airfoil flow. In conclusion, preliminary work was carried out such as development of numerical methods, and subgrid modelling in geometrically simple flows such as fully developed channel flow and periodic flow in a channel with a curved hill-shaped surface. Accurate LES of wall-bounded flow requires fine cells in the near-wall region in all coordinate directions. In an attempt to release this constraint, a large part of the LESFOIL project was aimed at developing and validating different approximate near-wall treatments. In the second half of the book, several LESs of the flow around the Aerospatiale-A airfoil are presented, using different numerical methods, grids, SGS models and near-wall treatments.