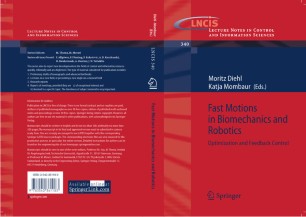 Fast Motions in Biomechanics and Robotics

In the past decades, much progress has been made in the field of walking robots. The current state of technology makes it possible to create humanoid robots that nearly walk like a human being, climb stairs, or avoid small - stacles. However, the dream of a robot running as fast and as elegantly as a human is still far from becoming reality. Control of such fast motions is still a big technological issue in robotics, and the maximum running speed of contemporary robots is still much smaller than that of human track runners. The conventional control approach that most of these robots are based on does not seem to be suitable to increase the running speeds up to a biological level.

In order to address this challenge, we invited an interdisciplinary community of researchers from robotics, biomechanics, control engineering and applied mathematics to come together in Heidelberg at the Symposium “Fast Motions in Biomechanics and Robotics – Optimization & Feedback Control” which was held at the International Science Forum (IWH) on September 7–9, 2005. The number of participants in this symposium was kept small in order to promote discussions and enable a fruitful exchange of ideas.