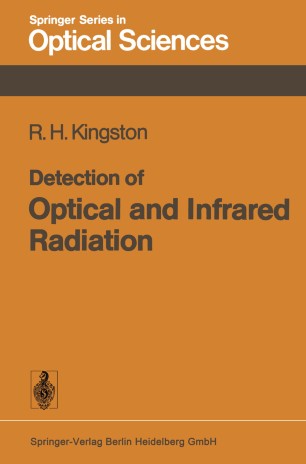 Detection of Optical and Infrared Radiation

This text treats the fundamentals of optical and infrared detection in terms of the behavior of the radiation field, the physical properties of the detector, and the statistical behavior of the detector output. Both incoherent and coherent detection are treated in a unified manner, after which selected applications are analyzed, following an analysis of atmospheric effects and signal statistics. The material was developed during a one-semester course at M.I.T. in 1975, revised and presented again in 1976 at Lincoln Laboratory, and rewritten for publication in 1977. Chapter 1 reviews the derivation of Planck's thermal radiation law and also presents several fundamental concepts used throughout the text. These include the three thermal distribution laws (Boltzmann, Fermi-Dirac, Bose­ Einstein), spontaneous and stimulated emission, and the definition and counting of electromagnetic modes of space. Chapter 2 defines and analyzes the perfect photon detector and calculates the ultimate sensitivity in the presence of thermal radiation. In Chapter 3, we turn from incoherent or power detection to coherent or heterodyne detection and use the concept of orthogonal spatial modes to explain the antenna theorem and the mixing theorem. Chapters 4 through 6 then present a detailed analysis of the sensitivity of vacuum and semiconductor detectors, including the effects of amplifier noise.