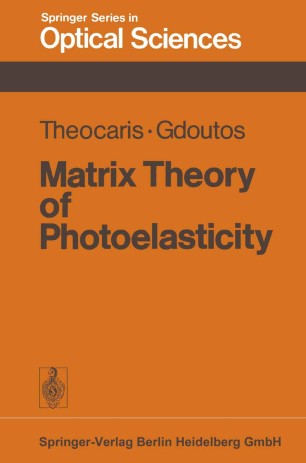 Photoelasticity as an experimental method for analyzing stress fields in mechanics was developed in the early thirties by the pioneering works of Mesnager in France and Coker and Filon in England. Almost concurrently, Föppl, Mesmer, and Oppel in Germany contributed significantly to what turned out to be an amazing development. Indeed, in the fifties and sixties a tremendous number of scientific papers and monographs appeared, all over the world, dealing with various aspects of the method and its applications in experimental stress analysis. All of these contributions were based on the so-called Neumann-Maxwell stress-opticallaw; they were developed by means of the classical methods of vector analysis and analytic geometry, using the conventionallight-vector concept. This way of treating problems of mechanics by photoelasticity indicated many shortcomings and drawbacks of this classical method, especially when three-dimensional problems of elasticity had to be treated and when complicated load and geometry situations existed. Meanwhile, the idea of using the Poincare sphere for representing any polarization profile in photoelastic applications was introduced by Robert in France and Aben in the USSR, in order to deal with problems of polarization oflight passing through aseries of optical elements (retarders andjor rotators). Although the Poincare-sphere presentation of any polarization profile con­ stitutes a powerful and elegant method, it exhibits the difficulty of requiring manipulations in three-dimensional space, on the surface of the unit sphere. However, other graphical methods have been developed to bypass this difficulty.