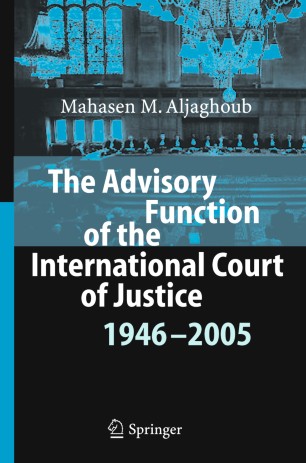 The Advisory Function of the International Court of Justice 1946-2005

I am pleased to write these words by way of a foreword to Dr. Mahasen Alj- houb’s book “The Advisory Function of the International Court of Justice”. I do so with a sense of pride in the achievement of a fellow countrywoman and, me- phorically speaking, a sister in law. My pride is coupled with hope and a nascent optimism that she – and a group of young Jordanian academics, mostly recent graduates of universities in the United Kingdom – will contribute further and significantly to the teaching and d- semination of international law in Jordan and, if I do not strain hope by hoping too much, in a region in which, notwithstanding its past glory, the culture of law has for too long been superceded by the logic of power politics and unbridled raison d’état. My only hesitation in writing this foreword is that a particularly heavy Court schedule has permitted me only a chance at a perusal of the contents of the book. A perusal which, whilst more than casual, falls short of the serious study that it deserves. Yet, I can unhesitatingly concur with the verdict of the internal and - ternal examiners who praised Dr. Aljaghoub’s thesis (as it then was) for “its th- oughness, detail and authoritativeness on this important area of international law”.