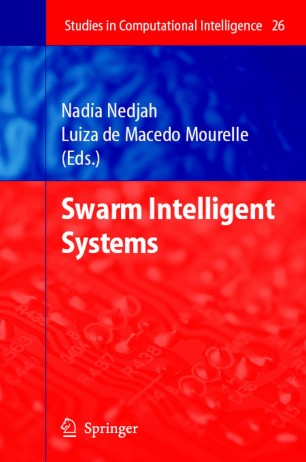 This volume offers a wide spectrum of sample works developed in leading research throughout the world about innovative methodologies of swarm intelligence and foundations of engineering swarm intelligent systems as well as applications and interesting experiences using the particle swarm optimisation.

Swarm intelligence is an innovative computational way to solve hard problems  which is at the heart of computational intelligence. In particular, particle swarm optimization, also commonly known as PSO, mimics the behavior of a swarm of insects or a school of fish. If one of the particle discovers a  good path to food the rest of the swarm will be able to follow instantly even if they are far away in the swarm. Swarm behavior is modeled by particles in  multidimensional space that have two characteristics: a position and a velocity. These particles wander around the hyperspace and remember the best position  that they have discovered. They communicate good positions to each other and adjust their own position and velocity based on these good positions.

Instead of designing complex and centralized systems, nowadays designers rather prefer to work with many small and autonomous agents. Each agent may prescribe to a global strategy. An agent acts on the simplest of rules. The many agents co-operating within the system can solve very complex problems with a minimal design effort. In General, multi-agent systems that use some swarm intelligence are said to be swarm intelligent systems. They are mostly used as search engines and optimization tools. The book should be useful both for beginners and experienced researchers in the field of computational intelligence.