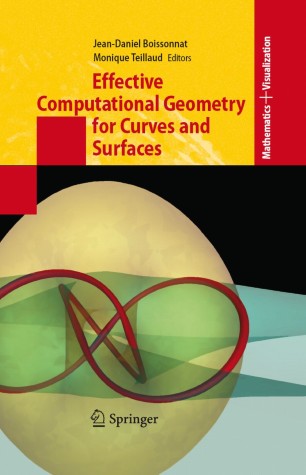 Computational geometry emerged as a discipline in the seventies and has had considerable success in improving the asymptotic complexity of the solutions tobasicgeometricproblemsincludingconstructionsofdatastructures,convex hulls, triangulations, Voronoi diagrams and geometric arrangements as well as geometric optimisation. However, in the mid-nineties, it was recognized that the computational geometry techniques were far from satisfactory in practice and a vigorous e?ort has been undertaken to make computational geometry more practical. This e?ort led to major advances in robustness, geometric software engineering and experimental studies, and to the development of a large library of computational geometry algorithms, Cgal. The goal of this book is to take into consideration the multidisciplinary nature of the problem and to provide solid mathematical and algorithmic foundationsfore?ectivecomputationalgeometryforcurvesandsurfaces. This book covers two main approaches. In a ?rst part, we discuss exact geometric algorithms for curves and s- faces. We revisit two prominent data structures of computational geometry, namely arrangements (Chap. 1) and Voronoi diagrams (Chap. 2) in order to understand how these structures, which are well-known for linear objects, behave when de?ned on curved objects. The mathematical properties of these structures are presented together with algorithms for their construction. To ensure the e?ectiveness of our algorithms, the basic numerical computations that need to be performed are precisely speci?ed, and tradeo?s are considered between the complexity of the algorithms (i. e. the number of primitive calls), and the complexity of the primitives and their numerical stability. Chap.

"Boissonat and Teillaud have collected in this book the foundations of a computational geometry that no longer deals exclusively with linear objects but also with curved objects that arise in applications. The book is composed of eight chapters written by teams of experts in each theme, and is the result of an European Union project named ECG. The book can serve as an advanced graduate course on computational geometry and as a reference for researchers interested in geometric algorithms for curved objects." (Luiz Henrique de Figueiredo, MathDL, March, 2007)