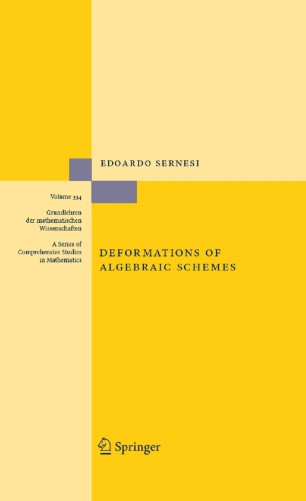 Part of the A Series of Comprehensive Studies in Mathematics book series (GL, volume 334)

The study of small and local deformations of algebraic varieties originates in the classical work of Kodaira and Spencer and its formalization by Grothendieck in the late 1950's. It has become increasingly important in algebraic geometry in every context where variational phenomena come into play, and in classification theory, e.g. the study of the local properties of moduli spaces.Today deformation theory is highly formalized and has ramified widely within mathematics. This self-contained account of deformation theory in classical algebraic geometry (over an algebraically closed field) brings together for the first time some results previously scattered in the literature, with proofs that are relatively little known, yet of everyday relevance to algebraic geometers. Based on Grothendieck's functorial approach it covers formal deformation theory, algebraization, isotriviality, Hilbert schemes, Quot schemes and flag Hilbert schemes. It includes applications to the construction and properties of Severi varieties of families of plane nodal curves, space curves, deformations of quotient singularities, Hilbert schemes of points, local Picard functors, etc. Many examples are provided. Most of the algebraic results needed are proved. The style of exposition is kept at a level amenable to graduate students with an average background in algebraic geometry.