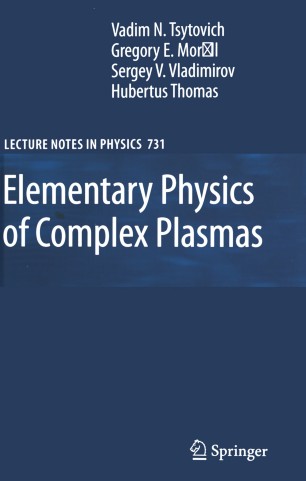 Complex plasmas are dusty plasmas in which the density and electric charges of the dust grains are sufficiently high to induce long-range grain-grain interactions, as well as strong absorption of charged-plasma components. Together with the sources replenishing the plasma such systems form a highly dissipative thermodynamically open system that exhibits many features of collective behaviour generally found in complex systems. Most notably among them are self-organized patterns such as plasma crystals, plasma clusters, dust stars and further spectacular new structures. Beyond their intrinsic scientific interest, the study of complex plasmas grows in importance in a great variety of fields, ranging from space-plasma sciences to applied fields such as plasma processing, thin-film deposition and even the production of computer chips by plasma etching, in which strongly interacting clouds of complex plasmas can cause major contamination of the final product.

Intended as first introductory but comprehensive survey of this rapidly emerging field, the present book addresses postgraduate students as well as specialist and nonspecialist researchers with a general background in either plasma physics, space sciences or the physics of complex systems.