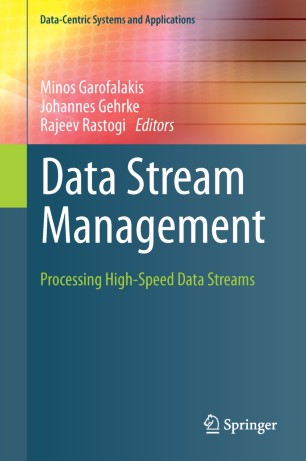 Part of the Data-Centric Systems and Applications book series (DCSA)

We live in the era of “Big Data”: Petabytes of digital information are generated daily, and need to be processed and analyzed for interesting patterns and trends. Besides volume, a defining characteristic of Big Data is its velocity; that is, data is instantiated in the form of continuous, high-speed data streams that arrive at rapid rates, and need to be processed and analyzed on a continuous (24x7) basis. Such data streams pose very difficult challenges for conventional data-management architectures, which are built primarily on the concept of persistent, static data collections. This volume focuses on the theory and practice of data stream management, and the novel challenges this emerging domain poses for data-management algorithms, systems, and applications. The collection of chapters, contributed by authorities in the field, offers a comprehensive introduction to both the algorithmic/theoretical foundations of data streams, as well as the streaming systems and applications built in different domains.

The book provides a comprehensive overview of core concepts and technological foundations, as well as various systems and applications, and is of particular interest to students, lecturers and researchers in the area of data stream management.

Minos Garofalakis is a Professor of Computer Science at the School of Electronic & Computer Engineering of the Technical University of Crete, and the Director of the Software Technology and Network Applications Lab (SoftNet).  Previously, he worked as a Member of Technical Staff at Bell Labs, Lucent Technologies (1998-2005), as a Senior Researcher at Intel Research Berkeley (2005-2007), and as a Principal Research Scientist at Yahoo! Research (2007-2008). In parallel, he also held an Adjunct Associate Professor position at the EECS Department of the University of California, Berkeley (2006-2008). Minos’s research interests include database systems, centralized/distributed data streams, data synopses and approximate query processing, uncertain databases, and big-data analytics and mining. He has published over 140 scientific papers in top-tier international conferences and journals in these areas. His work has resulted in 36 US Patent filings (29 patents issued) for companies such as Lucent, Yahoo!, and AT&T. Minos is an ACM Distinguished Scientist (2011),  and a recipient of the Bell Labs President's Gold Award (2004) and a Marie-Curie International Reintegration Fellowship (2010).

Johannes Gehrke is a Distinguished Engineer at Microsoft working as an architect and product visionary in the Applications and Services Group. From 1999 to 2015 he was the Tisch University Professor in the Department of Computer Science at Cornell University. Johannes' research interests are in the areas of database systems, data science, and data privacy. Johannes has received a National Science Foundation Career Award, an Arthur P. Sloan Fellowship, an IBM Faculty Award, the Cornell College of Engineering James and Mary Tien Excellence in Teaching Award, the Cornell University Provost's Award for Distinguished Scholarship, a Humboldt Research Award from the Alexander von Humboldt Foundation, the 2011 IEEE Computer Society Technical Achievement Award, and the 2011 Blavatnik Award for Young Scientists from the New York Academy of Sciences. He co-authored the undergraduate textbook Database Management Systems (currently in its third edition), used at universities all over the world. Johannes was Program co-Chair of ACM SIGKDD 2004, VLDB 2007, ICDE 2012, SOCC 2014, and ICDE 2015.

Rajeev Rastogi  is the Director of Machine Learning at Amazon. Previously, he was Vice President of Yahoo! Labs Bangalore and the founding Director of the Bell Labs Research Center in Bangalore, India. Rajeev is an ACM Fellow and a Bell Labs Fellow. He is active in the fields of databases, data mining, and networking, and has served on the program committees of several conferences in these areas. He currently serves on the editorial board of CACM, and has been an Associate editor for IEEE Transactions on Knowledge and Data Engineering in the past. He has published over 125 papers, and holds over 50 patents.

“This impressive volume … covers both the theory and algorithms related to processing high-speed data streams. … this is a very useful and well-written text that can be recommended for students, practitioners, and researchers alike. The subject matter fills in a range of details, starting from the basics (including related mathematical theorems) and progressing to describe recent developments along with adequate references to the existing literature and suggestions for future research.” (Paparao Kavalipati, Computing Reviews, January, 2017)