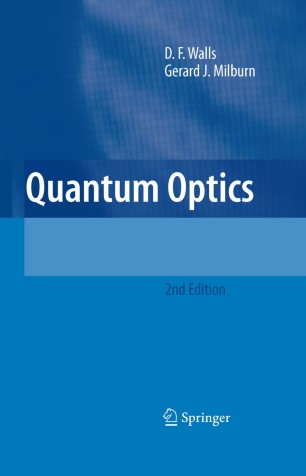 Quantum Optics gives a comprehensive coverage of developments in quantum optics over the past years. In the early chapters the formalism of quantum optics is elucidated and the main techniques are introduced. These are applied in the later chapters to problems such as squeezed states of light, resonance fluorescence, laser theory, quantum theory of four-wave mixing, quantum non-demolition measurements, Bell's inequalities, and atom optics. Experimental results are used to illustrate the theory throughout. This yields the most comprehensive and up-to-date coverage of experiment and theory in quantum optics in any textbook. More than 40 exercises helps readers test their understanding and provide practice in quantitative problem solving.

"The book contains new chapters, which cover areas of the field that were in their infancy or did not exist at all when the first edition was completed in 1994. … The second edition deserves to be intensely studied by students or young PhDs who want to pursue the research on quantum properties of light. It should also be a part of every university’s library." (Daniela Dragoman, Optics and Photonics News, November, 2008)

"This is a beautiful and self-contained textbook that unifies new and well-established basic theory and experiment. It provides the readers with … both the tools of theoretical quantum optics and clarifications on the way features of squeezed states are currently being exploited, as for protocols in quantum information. … It can be definitively suggested, among the others, to all those who are willing to be safely guided into the theoretical and experimental fundamentals that place quantum optics in a central position in modern physics." (Giulio Landolfi, Zentralblatt MATH, Vol. 1163, 2009)

“Quantum optics has witnessed significant theoretical and experimental developments, which are indeed concisely and effectively surveyed in the book. It covers a broad range of topics in the field, from the fundamentals to specialized problems of modern research, through a precise, though not introductory, treatment. The book is definitely suitable to graduate students and researchers in quantum optics with a solid mathematical background. … a valuable and enjoyable tool to complete and enrich an already established knowledge in the field.” (Amalia Torre, Mathematical Reviews, Issue 2011 h)