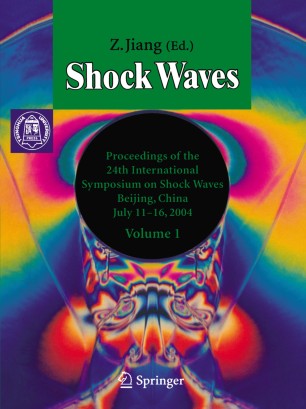 The 24th International Symposium on Shock Waves (ISSW24) was held at the Beijing Friendship Hotel during July 11-16, 2004, in Beijing. It was a great pleasure for the Local Organizing Committee to organize the ISSW in China for the first time, because forty-seven years have passed since the First Shock Tube Symposium was held in 1957 at Albuquerque. The ISSW24 had to be postponed for one year because of the SARS outbreak in Beijing shortly before the Symposium was scheduled to be held in 2003, but it has achieved success due to the continuous support and kind understanding from all the delegates. It is very heart-warming to have had such an experience and I am very happy to have served as chairman for the Symposium. I would like to thank all for the contributions and help that they have given us over the past three years, without which we would not have had the Symposium. A total of 460 abstracts were submitted to the ISSW24. Each of the abstracts was evaluated by three members of the Scientific Review Committee and the decision on acceptance wasmade based on the reviewers' reports. 195oral papers,including 9plenary lectures, wereaccepted to be presented in three parallel sessions, and 135poster papers in three dedicated poster sessions. Topics discussed in these papers cover all aspects ofshock wave research.