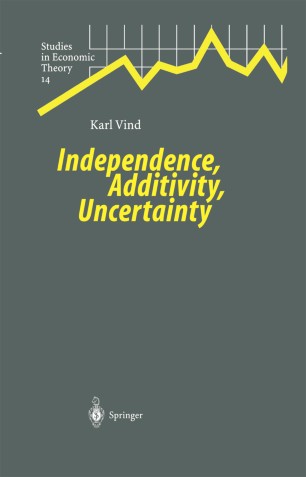 The work on this book started many years ago as an attempt to simplify and unify some results usually taught in courses in mathematical economics. The economic interpretation of the re­ sults were representations of preferences as sums or integrals and the decomposition of preferences into utilities and probabilities. It later turned out that t.he approach taken in the earlier versions were also the proper approach in generalizing from preferences which were total preorders to preferences which were not total or tran­ sitive. The same mathematics would even in that situation give representations which were additive. It would also give decomposi­ tions where concepts of uncertainty appeared. Early versions of some of the results appeared as Working Pa­ pers No. 135, 140, 150, and 176 from The Center for Research in Management Science, Berkeley. A first version of chapters 2, 4, 6, 7, and 8 appeared 1969 with the title" Mean Groupoids" [177]. They are essentially unchanged -except for some notes especially in chapter 6. Another version appeared 1990 as [178]. Chapter 10 contains results from the same versions and from [181]. Chapter 11 by Birgit Grodal is based on [91] by Grodal and Jp,an-Francois Mertens. Chapters 11 and 12 - also by Birgit Gro­ dal -contains the results from the earlier versions, but have been extended (by Karl Vind) to take into account the new corollaries of the results in the other chapters.