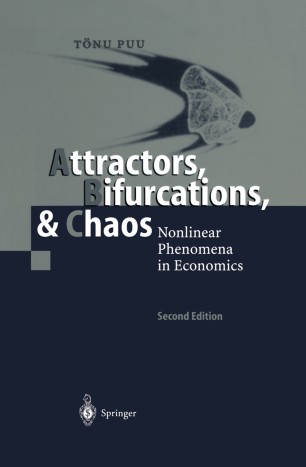 The present book relies on various editions of my earlier book "Nonlinear Economic Dynamics", first published in 1989 in the Springer series "Lecture Notes in Economics and Mathematical Systems", and republished in three more, successively revised and expanded editions, as a Springer monograph, in 1991, 1993, and 1997, and in a Russian translation as "Nelineynaia Economicheskaia Dinamica". The first three editions were focused on applications. The last was differ­ ent, as it also included some chapters with mathematical background mate­ rial -ordinary differential equations and iterated maps -so as to make the book self-contained and suitable as a textbook for economics students of dynamical systems. To the same pedagogical purpose, the number of illus­ trations were expanded. The book published in 2000, with the title "A ttractors, Bifurcations, and Chaos -Nonlinear Phenomena in Economics", was so much changed, that the author felt it reasonable to give it a new title. There were two new math­ ematics chapters -on partial differential equations, and on bifurcations and catastrophe theory -thus making the mathematical background material fairly complete. The author is happy that this new book did rather well, but he preferred to rewrite it, rather than having just a new print run. Material, stemming from the first versions, was more than ten years old, while nonlinear dynamics has been a fast developing field, so some analyses looked rather old-fashioned and pedestrian. The necessary revision turned out to be rather substantial.