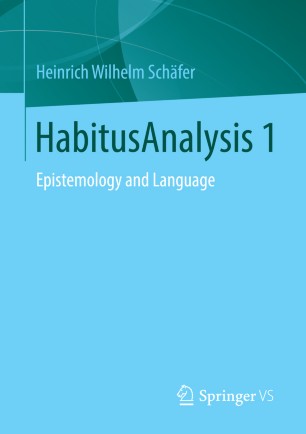 This book is the first of three volumes of HabitusAnalysis that take the sociology of Pierre Bourdieu as a starting point to develop a methodical approach to the habitus of social actors. However, the concept of habitus and Bourdieu’s approach to language are somewhat disputed while his relationist epistemology is seldom paid tribute to. The present volume therefore in its first part deals with Bourdieu’s roots in relationist Neo-Kantian philosophy, the basic traits of his relationist sociology. The second part examines Bourdieu’s theoretical and empirical work on language before elaborating its own praxeological concept of language use that opens the road to a methodically and theoretically sound reconstruction of the habitus of social actors. In the second volume of HabitusAnalysis we will carefully re-read Bourdieu’s theory in order to develop a disposition-based theory of the habitus that emphasizes the creative potential of the linkage between mental orientations and socio-structural processes, classification and classes, as well as dispositions and positions. The method presented in the third volume will facilitate a detailed empirical analysis of the creative transformations operated by the habitus in relation with the social structures of domination and the dynamics of social differentiation.

·         Substances and relations—premises in epistemology

Students and Scholars in the field of Social Sciences in general, especially in Sociology of Religion and Social Movement Theory.

Heinrich Wilhelm Schäfer is Professor for Sociology of Religion at Bielefeld University, Germany.

Heinrich Wilhelm Schäfer is Professor for Sociology of Religion at Bielefeld University, Germany.