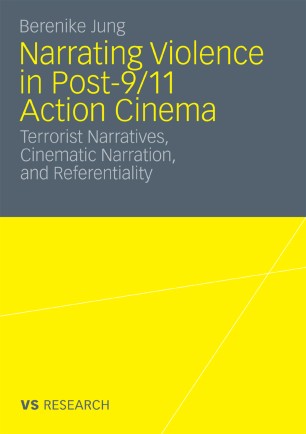 This work discusses the way in which action movies have responded to the visual and narrative challenge of depicting terrorist violence after 9/11, when the spectacular representation of terrorist violence – and by extension the consumers of these imagers – was considered as complicit behaviour. If terrorism is theatre, who goes to see the show? A close-reading of exemplary movies (V for Vendetta, Munich, and Children of Men) concentrates on three key aspects: How is terrorist violence justified, especially in comparison to other forms of violence? How is the audience implicitly positioned? And finally, what is the role and scope of the films’ visual short-cuts, iconic “real” images such as those from the Abu Ghraib prison? The results reaffirm popular movies' power of working through traumatic events as well as their capacity to articulate a valid political critique. Instead of inventing or preceding real acts of violence, cinema can document, witness, and encourage the spectator to explore unorthodox viewing positions and moral dilemma. This interdisciplinary work is addressed to students of Philosophy, the Humanities, Cinema, American, or Cultural Studies as well as to the interested public.

Berenike Jung studied Comparative Literature, Cinema, and North American Studies in Berlin, New York, and Paris. She works as a journalist and author with a focus on film and media.