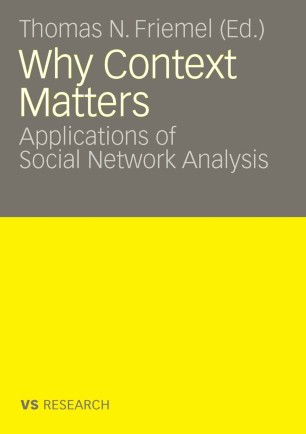 Many elements of our society are embedded in network structures in which actors depend on each other as well as the structural context of their actions. This is reflected by the wide use of concepts and terms of social network analysis, such as the concept of the small world, the strength of weak ties, opinion leaders, gatekeepers, viral marketing, terrorist networks, stakeholders and the like. This volume provides a sample of the broad range of research in which social network analysis can be fruitfully applied. Topics addressed include networks of academic hiring, epidemic dynamics of diseases in populations such as HIV/AIDS, flow of information, semantic networks of the internet, relationships in private and public spheres, patent authorship, paper citation, and networks in linguistic as well as political systems.

Thomas N. Friemel is Assistant Professor at the Institute of Mass Communication and Media Research at the University of Zurich (IPMZ). The 3rd and 4th Conferences on Applications of Social Network Analysis (ASNA 2006/2007) were held under his chairmanship.