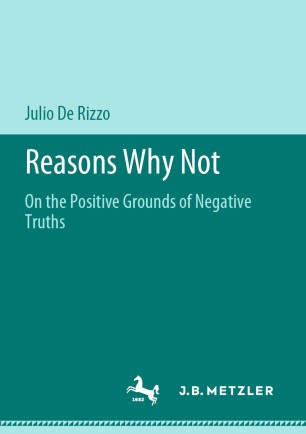 On the Positive Grounds of Negative Truths

Many philosophers have shown sympathy to the thought that reality is fundamentally positive. Julio De Rizzo formulates this idea precisely by means of the notion of grounding, and examines how the resulting thesis fares with respect to three much discussed classes of negative truths, namely that of negative predications, that of negative causal reports, and that of negative existential truths. By shedding light on the issues advocates of the thesis have to deal with, this work shows the positivist account to be a tenable position in metaphysics.
Contents
Target Groups
The Author
Julio De Rizzo holds a PhD in theoretical philosophy from the University of Hamburg, Germany and currently teaches at the Pontifical Catholic University of Campinas, Brazil. He studied philosophy at the Pontifical Catholic University of São Paulo and the University of São Paulo, Brazil. His research interests focus on analytic metaphysics and the philosophy of logic.