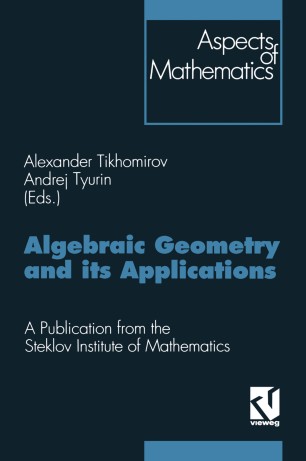 Algebraic Geometry and its Applications

Proceedings of the 8th Algebraic Geometry Conference, Yaroslavl’ 1992. A Publication from the Steklov Institute of Mathematics. Adviser: Armen Sergeev

Part of the Aspects of Mathematics book series (ASMA, volume 25)

This volume consists of articles presented as talks at the Algebraic Geometry Conference held in the State Pedagogical Institute of Yaroslavl'from August 10 to 14, 1992. These conferences in Yaroslavl' have become traditional in the former USSR, now in Russia, since January 1979, and are held at least every two years. The present conference, the eighth one, was the first in which several foreign mathematicians participated. From the Russian side, 36 specialists in algebraic geometry and related fields (invariant theory, topology of manifolds, theory of categories, mathematical physics etc. ) were present. As well modern directions in algebraic geometry, such as the theory of exceptional bundles and helices on algebraic varieties, moduli of vector bundles on algebraic surfaces with applications to Donaldson's theory, geometry of Hilbert schemes of points, twistor spaces and applications to string theory, as more traditional areas, such as birational geometry of manifolds, adjunction theory, Hodge theory, problems of rationality in the invariant theory, topology of complex algebraic varieties and others were represented in the lectures of the conference. In the following we will give a brief sketch of the contents of the volume. In the paper of W. L. Baily three problems of algebro-geometric nature are posed. They are connected with hermitian symmetric tube domains. In particular, the 27-dimensional tube domain 'Fe is treated, on which a certain real form of E7 acts, which contains a "nice" arithmetic subgroup r e, as observed earlier by W. Baily.