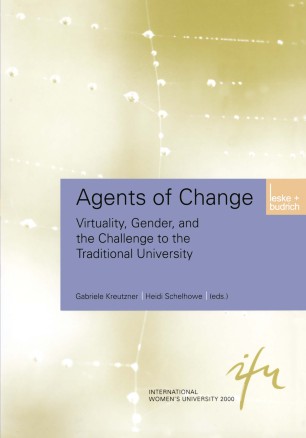 Virtuality, Gender, and the Challenge to the Traditional University

One of the major driving forces behind the international Women´s University was the interest in changing the traditional university. In its pursuit of this goal, the projekt vifu (the Virtual International University) combined the overall focus on gender with a conceptual stress on virtuality as a potential inroad to transform and innovate the established academic system. This collection presents results and critical evaluations of the vifu as a feminist project designed in flavor of change. In addition to this, the volume presents and discusses projects which theoretically and practically integrate the new ICTs into their departure to new horizons in higher education and research and at the same practice a particular sensitivity towards gender as a social category. The authors of this anthology share the perspective on the category of gender and ICT-related developments summed up by "virtuality" as potential tools for transforming traditional academia. While change is not considered as a quality per se, each contribution makes its case for specific kinds of "making new". In doing so, they also seek answers to the questions of a democratic and socially responsible knowledge production and distribution in the 21 st century.