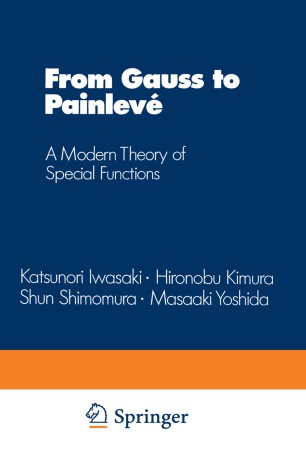 From Gauss to Painlevé

A Modern Theory of Special Functions

Part of the Aspects of Mathematics book series (ASMA, volume 16)

Preface The Gamma function, the zeta function, the theta function, the hyper­ geometric function, the Bessel function, the Hermite function and the Airy function, . . . are instances of what one calls special functions. These have been studied in great detail. Each of them is brought to light at the right epoch according to both mathematicians and physicists. Note that except for the first three, each of these functions is a solution of a linear ordinary differential equation with rational coefficients which has the same name as the functions. For example, the Bessel equation is the simplest non-trivial linear ordinary differential equation with an irreg­ ular singularity which leads to the theory of asymptotic expansion, and the Bessel function is used to describe the motion of planets (Kepler's equation). Many specialists believe that during the 21st century the Painleve functions will become new members of the community of special func­ tions. For any case, mathematics and physics nowadays already need these functions. The corresponding differential equations are non-linear ordinary differential equations found by P. Painleve in 1900 fqr purely mathematical reasons. It was only 70 years later that they were used in physics in order to describe the correlation function of the two dimen­ sional Ising model. During the last 15 years, more and more people have become interested in these equations, and nice algebraic, geometric and analytic properties were found.