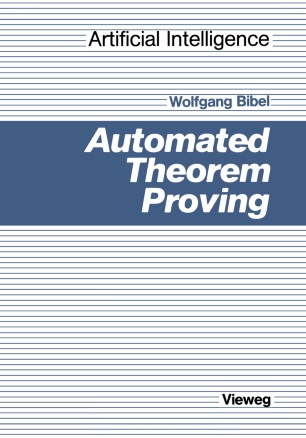 Since both the coments and the structure of the book appeared to be successful, only minor changes were made. In particular, some recent work in ATP has been incorporated so that the book continues to reflect the state of the art in the field. The most significant change is in the quality of the layout including the removal of a number of inaccuracies and typing errors. R. Caferra, E. Eder, F. van der Linden, and J. Muller have caught vanous minor errors. P. Haddawy and S.T. Pope have provided many stilistic improvements of the English text. Last not least, A. Bentrup and W. Fischer have produced the beautiful layout. The extensive work of typesetting was financally supported within ESPRIT pro­ ject 415. Munchen, September 1986 W. Bibel PREFACE Among the dreams of mankind is the one dealing with the mechanization of human thought. As the world today has become so complex that humans apparently fail to manage it properly with their intellectual gifts, the realization of this dream might be regarded even as something like a necessity. On the other hand, the incredi­ ble advances in computer technology let it appear as a real possibility.