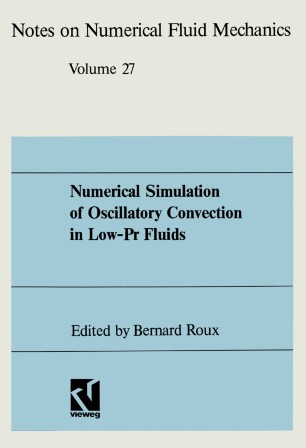 For the last ten years, there has been an ever-increasing awareness that fluid motion and transport processes influenced by buoyancy are of interest in many fields of science and technology. In particular, a lot of research has been devoted to the oscillatory behaviour of metallic melts (low-Pr fluids) due to the very crucial impact of such flow oscillations on the quality of growing crystals, semi-conductors or metallic alloys, for advanced technology applications. Test cases on the 2D oscillatory convection in differentially heated cavities containing low-Pr fluids have been defined by the organizing committee, and proposed to the community in 1987. The GAMM-Worshop was attended by 55 scientists from 12 countries, in Oct. 1988 in Marseille (France). Twenty-eight groups contributed to the mandatory cases coming from France (12), other European countries (7) and other countries: USA, Japan and Australia (9). Several groups also presented solutions of various related problems such as accurate determination of the threshold for the onset of oscillations, thermocapillary effect in open cavities, and 3D simulations. Period doubling, quasi- periodic behaviour, reverse transition and hysteresis loops have been reported for high Grashof numbers in closed cavities. The workshop was also open to complementary contributions (5), from experiments and theory (stability and bifurcation analysis). The book contains details about the various methods employed and the specific results obtained by each contributor.