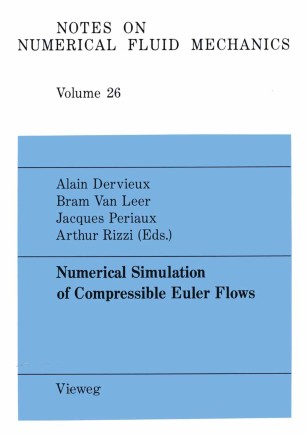 The numerical simulation of the Euler equations of Fluid Dynamics has been these past few years a challenging problem both for research scientists and aerospace engineers. The increasing interest of more realistic models such as the Euler equations originates in Aerodynamics and also Aerothermics where aerospace applications such as military aircrafts and also space vehicles require accurate and efficient Euler solvers (which can be extended to more complicated modelisations including non-equilibrium chemistry) for su­ personic and hypersonic flows at high angles of attack and Mach number regimes involving strong shocks and vorticity. This book contains the proceedings of the GAMM Workshop on the Numerical Simu­ lation of Compressible Euler Flows. that W:LS held at INRIA, Rocquencourt (France), on June 10-13, 1986. The purpose of this event was to compare in terms of accuracy and efficiency several codes for solving compressible inviscid, mainly steady, Euler flows. This workshop was a sequel of the GAMM workshop held in 1979 in Stockholm; this time, though, because of the present strong activity in numerical methods for the Euler equat.ions, the full-potential approach was not included. Since 1979, other Eulpr workshops have been organised, sev­ eral of them focussed on airfoil calculations; however, many recently derived methods were not presented at these workshops, because, among other reasons, the methods were not far enough developed, or had not been applied to flow problems of sufficient complexity. In fact, the 1986 GAMM workshop scored very high as regards to the novelty of methods.