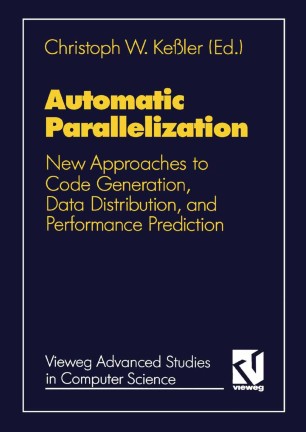 Distributed-memory multiprocessing systems (DMS), such as Intel's hypercubes, the Paragon, Thinking Machine's CM-5, and the Meiko Computing Surface, have rapidly gained user acceptance and promise to deliver the computing power required to solve the grand challenge problems of Science and Engineering. These machines are relatively inexpensive to build, and are potentially scalable to large numbers of processors. However, they are difficult to program: the non-uniformity of the memory which makes local accesses much faster than the transfer of non-local data via message-passing operations implies that the locality of algorithms must be exploited in order to achieve acceptable performance. The management of data, with the twin goals of both spreading the computational workload and minimizing the delays caused when a processor has to wait for non-local data, becomes of paramount importance. When a code is parallelized by hand, the programmer must distribute the program's work and data to the processors which will execute it. One of the common approaches to do so makes use of the regularity of most numerical computations. This is the so-called Single Program Multiple Data (SPMD) or data parallel model of computation. With this method, the data arrays in the original program are each distributed to the processors, establishing an ownership relation, and computations defining a data item are performed by the processors owning the data.