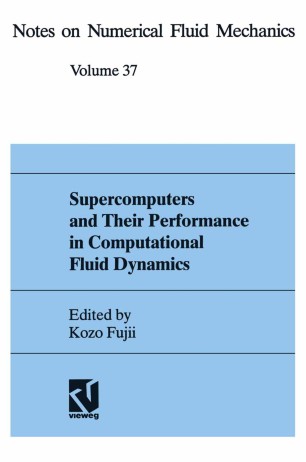 Supercomputers and Their Performance in Computational Fluid Dynamics

Supercomputer technologies have evolved rapidly since the first commercial-based supercomputer, CRAY-1 was introduced in 1976. In early 1980's three Japanese super­ computers appeared, and Cray Research delivered the X-MP series. These machines including the later-announced CRAY-2 and NEC SX series created one generation of supercomputers, and the market was spread dramatically. The peak performance was higher than 1 GFLOPS and the compiler improvement was remarkable. There appeared many articles and books that described their architecture and their performance on The late 1980's saw a new generation of supercomputers. several benchmark problems. Following CRAY Y-MP and Hitachi S-820 delivered in 1988, NEC announced SX-3 and Fujitsu announced the VP2000 series in 1990. In addition, Cray Research announced the Y-MP C-90 late in 1991. The peak performance of these machines reached several to a few ten's GFLOPS. The hardware characteristics of these machines are known, but their practical performance has not been well documented so far. Computational Fluid Dynamics (CFD) is one of the important research fields that have been progressing with the growth of supercomputers. Today's fluid dynamic re­ search cannot be discussed without supercomputers and since CFD is one of the im­ portant users of supercomputers, future development of supercomputers has to take the requirements of CFD into account. There are many benchmark reports available today. However, they mostly use so called kernels. For fluid dynamics researchers, benchmark test on real fluid dynamic codes are necessary.