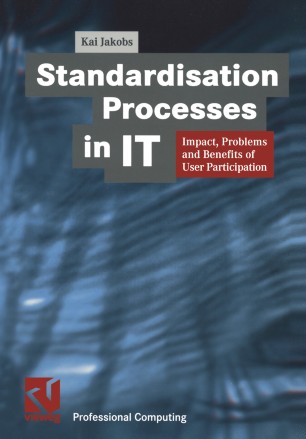 Standardisation Processes in IT

2. 1 Standards and Standardisation in IT -A General Overview The process of standardisation cannot be regarded as a simple, one­ dimensional activity required to lay down technical rules and guidelines, taking place in a removed world of its own. Rather, it must be considered in conjunction with the environment within which it takes place. Very different facets need to be taken into account when trying to actually understand this process. Even if we disregard social, moral and religious rules for the moment, standards -still in a very general sense -have been with us for quite some time: about 5,000 years ago the first alphabets emerged, enabling completely new forms of communication and information storage. Some 2,500 years later, the first national, coin-based currency, invented by the Lydians, established the basis for easier inter-regional and even international trading. The industrial revolution in the 18th century and, more so, the advent of the railroad in the 19th century resulted in a need for technical standards, which was once more reinforced when mass production generated a demand for interchangeable parts. In parallel, the invention of the electric telegraph in 1837 triggered the development of standards in the field of electrical communication technology. In 1865, the International Telegraph Union -to become the International Telecommunication Union (ITU) in 1932 -was founded by twenty states. The other major international standards setting body, the International Organization for Standardization (ISO), was established in 1947.