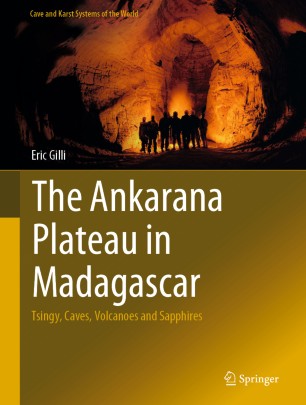 The Ankarana Plateau in Madagascar

The book describes the Ankarana plateau and its cave network in Madagascar, depicting the natural environment of the Plateau as well as the natural processes which created the cave network of more than 100km with many galleries, some are very large and draped with different cave formations and underground rivers are inhabited with crocodiles and giant eels.This place is famous for its surface landscape formed with tsingy, natural needles formed by the weathering of limestone. The Ankarana is surrounded by native Madagascan rain forest inhabited with lemurs and it was a natural shelter for the Ankarana people whose kings were buried in caves. The cave system has been partially explored since the sixties and exploration is still in progress. The book includes several maps (geology, topography, hydrology), the survey of the caves and a brief description of the Ankarana Kingdom.