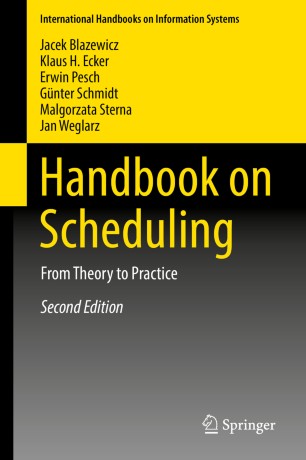 This handbook provides a comprehensive introduction to the theory and applications of scheduling in advanced planning and computer systems. It addresses a broad audience including practitioners and researchers interested in scheduling, as well as graduate and advanced undergraduate students in the fields of computer science and computer engineering, operations research, industrial and real-time engineering, management science, business administration and information systems, and applied mathematics.
The book begins by providing an introduction to and basic concepts from discrete mathematics. Single and multiple processor systems are covered, with a focus on multiprocessor tasks and hard real-time systems. Flow shop and open shop scheduling, as well as scheduling in job shops, are explained in detail. Issues like limited processor availability, time-dependence, resource constraints and imprecise computations are dealt with in dedicated chapters. Special attention is given to online scheduling, constraint programming and disjunctive scheduling. The book also features applications and cases involving flexible manufacturing systems, computer integrated production scheduling and logistics. In particular it presents case studies on optimization procedures for the production of acrylic glass and of helicopter parts in a flexible manufacturing system, an efficient decision support system for airport gate scheduling, concrete delivery planning, and berth and quay crane allocation at seaports.

Jacek Blazewicz is professor of Computer Science at the Poznan University of Technology (Poland). He is IFORS Vice President for EURO, an IEEE Fellow, and co-laureate of the EURO Gold Medal, Copernicus Prize and several Awards of the Polish Ministry of Science.

Erwin Pesch has Ph.D. in Mathematics and habilitation in Business Administration. He worked at universities in Darmstadt, Maastricht and Bonn. He is a professor at the Faculty of Economics and Business Administration of the University in Siegen (Germany) and director of the Center for Advanced Studies in Management (CASiM) at the HHL Leipzig Graduate School of Management (Germany). Together with Jacek Błażewicz he received the Copernicus Prize in 2012 jointly awarded by the German Research Foundation (DFG) and the Foundation for Polish Science (FNP). In 2017 he received the Science Award of the German Operations Research Society (GOR).

Malgorzata Sterna is associate professor at the Faculty of Computing of the Poznan University of Technology (Poland), from which she received  Ph.D. and habilitation in Computer Science. She is a recipient of the stipend of the Foundation for Polish Science and the award of the Polish Academy of Sciences (Technical Sciences).

Günter Schmidt is professor of Operations Research and Business Informatics at the Computer Science Department and the Business School at Saarland University (Germany). He is member of Graduate School for Computer Science, researcher at Max Planck Institut Informatik and director of the Institute of Information and Communication Systems. He is also honorary professor at the University of Cape Town (South Africa).

Jan Węglarz is professor of Computing at the Poznań University of Technology (Poland), and director of the Poznań Supercomputing and Networking Center. He is co-laureate of the EURO Gold Medal and a recipient of the Foundation for Polish Science Award.