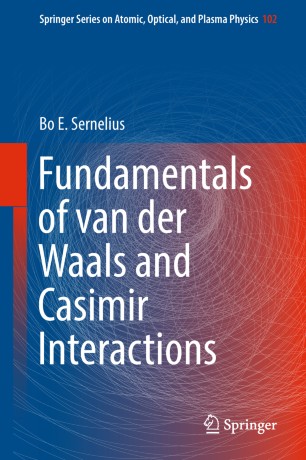 This book presents a self-contained derivation of van der Waals and Casimir type dispersion forces, covering the interactions between two atoms but also between microscopic, mesoscopic, and macroscopic objects of various shapes and materials. It also presents detailed and general prescriptions for finding the normal modes and the interactions in layered systems of planar, spherical and cylindrical types, with two-dimensional sheets, such as graphene incorporated in the formalism.

A detailed derivation of the van der Waals force and Casimir-Polder force between two polarizable atoms serves as the starting point for the discussion of forces: Dispersion forces, of van der Waals and Casimir type, act on bodies of all size, from atoms up to macroscopic objects. The smaller the object the more these forces dominate and as a result they play a key role in modern nanotechnology through effects such as stiction. They show up in almost all fields of science, including physics, chemistry, biology, medicine, and even cosmology.