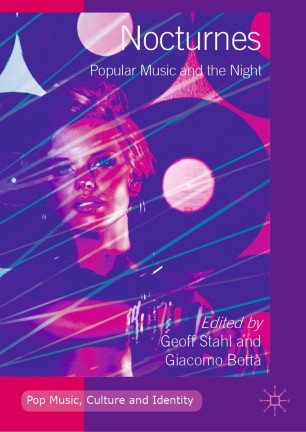 Nocturnes: Popular Music and the Night

The night and popular music have long served to energise one another, such that they appear inextricably bound together as trope and topos. This history of reciprocity has produced a range of resonant and compelling imaginaries, conjured up through countless songs and spaces dedicated to musical life after dark. Nocturnes: Popular Music and the Night is one of the first volumes to examine the relationship between night and popular music. Its scope is interdisciplinary and geographically diverse.
The contributors gathered here explore how the problems, promises, and paradoxes of the night and music play off of one another to produce spaces of solace and sanctuary as well as underpinning strategies designed to police, surveil and control movements and bodies. This edited collection is a welcome addition to debates and discussions about the cultures of the night and how popular music plays a continuing role in shaping them.
Geoff Stahl is Senior Lecturer in Media Studies at Victoria University of Wellington, New Zealand. His research areas include cities, scenes, subcultures, semiotics, popular music and advertising. He has published on music making in Montreal, Berlin and Wellington.
Giacomo Bottà is a grant researcher and part-time lecturer in cultural urban studies at the University of Helsinki, Finland. He has researched and written about post-punk in Manchester and Düsseldorf, social beat and poetry slam in Berlin, punk in Turin and Tampere, a Clash gig in Bologna and about music scenes in declining industrial cities in general. He edited Invisible Landscapes: Popular Music and Spatiality (2016).