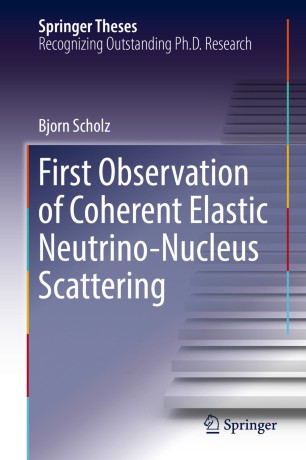 This thesis describes the experimental work that finally led to a successful measurement of coherent elastic neutrino-nucleus scattering—a process proposed forty-three years ago. The experiment was performed at the Spallation Neutron Source facility, sited at Oak Ridge National Laboratory, in Tennessee.

Of all known particles, neutrinos distinguish themselves for being the hardest to detect, typically requiring large multi-ton devices for the job. The process measured here involves the difficult detection of very weak signals arising from nuclear recoils (tiny neutrino-induced “kicks” to atomic nuclei), but leads to a much larger probability of neutrino interaction when compared to all other known mechanisms. As a result of this, “neutrino technologies” using miniaturized detectors (the author's was handheld and weighed only 14 kg) become a possibility. A large community of researchers plans to continue studying this process, facilitating an exploration of fundamental neutrino properties that is presently beyond the sensitivity of other methods.

Bjorn Scholz received his PhD from the University of Chicago in 2017.