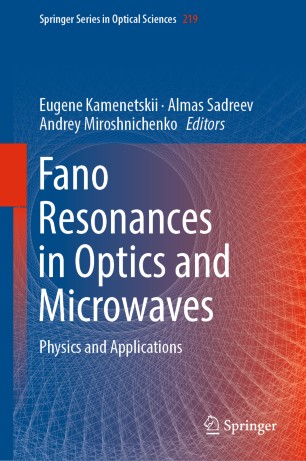 Fano Resonances in Optics and Microwaves

This book discusses the development of Fano-based techniques and reveals the characteristic properties of various wave processes by studying interference phenomena. It explains that the interaction of discrete (localized) states with a continuum of propagation modes leads to Fano interference effects in transmission, and explores novel coherent effects such as bound states in the continuum accompanied by collapse of Fano resonance.

Originating in atomic physics, Fano resonances have become one of the most appealing phenomena of wave scattering in optics, microwaves, and terahertz techniques. The generation of extremely strong and confined fields at a deep subwavelength scale, far beyond the diffraction limit, plays a central role in modern plasmonics, magnonics, and in photonic and metamaterial structures. Fano resonance effects take advantage of the coupling of these bound states with a continuum of radiative electromagnetic waves. With their unique physical properties and unusual combination of classical and quantum structures, Fano resonances have an application potential in a wide range of fields, from telecommunication to ultrasensitive biosensing, medical instrumentation and data storage. Including contributions by international experts and covering the essential aspects of Fano-resonance effects, including theory, modeling and design, proven and potential applications in practical devices, fabrication, characterization and measurement, this book enables readers to acquire the multifaceted understanding required for these multidisciplinary challenges.

Dr. EUGENE O. KAMENETSKII received his diploma of Engineer in Electrical Engineering and the PhD degree in Physics and Mathematics from the Electrical Engineering Institute, St. Petersburg, Russia, in 1969 and 1986, respectively. He is presently with Ben Gurion University of Negev, Israel as a Head of Microwave Magnetic Laboratory. He is an author (co-author) of 150 refereed journal and conference papers. He was an Editor of the Review Book: "Electromagnetic, magnetostatic, and exchange-interaction vortices in confined magnetic structures", Research Signpost Publisher, Kerala, 2008.  He is a Fellow of the Electromagnetics Academy (USA) since 2007. His special fields of scientific interests are magnetic waves and oscillations, spectral theory of artificial atomic structures, metamaterials for microwave and optics applications, microwave microscopy, and microwave biosensing.

A/Prof ANDREY MIROSHNICHENKO obtained his PhD in 2003 from the Max-Planck Institute for Physics of Complex Systems in Dresden, Germany. In 2004 he moved to Australia to join the Nonlinear Physics Centre at ANU. During this time A/Prof Miroshnichenko made fundamentally important contributions to the field of photonic crystals and bringing the concept of the Fano resonances to photonics. In 2007 A/Prof Miroshnichenko was awarded by Australian Postdoctoral Fellowship from the Australian Research Council. It allowed him to initiate the research on a new class of tunable photonic structures infiltrated with liquid crystals. Later, in 2011 he was awarded by Future Fellowship from the Australian Research Council. During this period he pioneered the research of high-index dielectric nanoparticles in the visible range, including one of the first demonstrations of the optically induced magnetic response in silicon nanoparticles. In 2017 he has moved to the University of New South Wales Canberra and got very prestigious Scientia Fellowship. The current topics of his research are nonlinear nanophotonics, topologiccal photonics, and resonant interaction of light with nanoclusters, including optical nanoantennas and metamaterials.