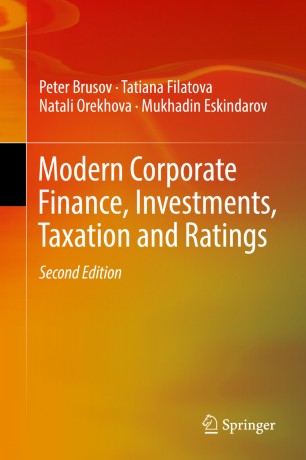 This monograph is devoted to a modern theory of capital cost and capital structure created by this book’s authors, called the Brusov–Filatova–Orekhova (BFO) theory, and its application to the real economy. BFO theory promises to replace the traditional theory of capital cost and capital structure by Nobel laureates Modigliani and Miller. This new theory in particular, presents a possible explanation to the causes of the recent global financial crisis. The authors of the book describe the general theory of capital cost and capital structure that can be applied to corporations of arbitrary age (or with arbitrary lifetime) and investment projects with arbitrary duration. The authors illustrate their theory with examples from corporate practice and develop investment models that can be applied by companies in their financial operations.

This updated second edition includes new chapters devoted to the application of the BFO theory in ratings, banking and other areas. The authors also provide a new approach to rating methodology highlighting the need for including financial flow discounting, the incorporation of rating parameters (in particular, financial ratios) into the modern theory of capital structure - BFO theory. This book aims to change our understanding of corporate finance, investments, taxation and rating procedures. The authors emphasize that the most used principles of financial management should be changed in accordance to BFO theory.

Petr Nickitovich Brusov is professor at the Financial University under the Government of the Russian Federation (Moscow). Originally a physicist, he was the co-founder of (together with Victor Popov) the theory of collective properties of superfluids and superconductors. In area of finance and economy, Peter Brusov has created a modern theory of capital cost and capital structure, the Brusov- Filatova- Orekhova theory, together with Tatiana Filatova and Natali Orekhova. Peter Brusov has been visiting Professor of Northwestern University (USA), Cornell University (USA), Osaka City University (Japan) among other places. He is the author of over 500 research publications including six monographs, numerous textbooks and articles.

Tatiana Filatova is professor at the Financial University under the Government of the Russian Federation (Moscow). In the last 20 years, she has been a dean of the faculties of financial management, management, state and municipal government among others at the Financial University. Tatiana Filatova is the author of over 250 research publications including five monographs, numerous textbooks and articles.

Natali Orekhova is professor of the Center of Corporate Finance, Investment, Taxation and Rating at the Research Consortium of Universities of the South of Russia. Natali Orekhova has been leading scientist of the Financial University under the Government of the Russian Federation. She is the author of over 100 research publications including three monographs, numerous textbooks and articles.

Mikhail Abdurakhmanovich Eskindarov is professor, honored scholar of the Russian Federation; member of the Russian Academy of Education, and rector of the Financial University under the Government of the Russian Federation (Moscow). Mikhail A. Eskindarov has played crucial administrative, teaching and researcher roles at the Financial University. He is the author of over 200 research publications including monographs, manuals and articles on issues related to labor and production efficiency; financial and industrial groups; economic development of the third world countries, and modernization of the educational system.  As a member of various state and public administration bodies, Mikhail A. Eskindarov has been honored with highly recognized state and public awards, including the IV Class Order for Merit to the Fatherland, Order of Friendship, Petr Stolypin II Class Medal, badge of the Honored Worker of the Higher Education System of the Russian Federation, Patriot of Russia Medal among others.