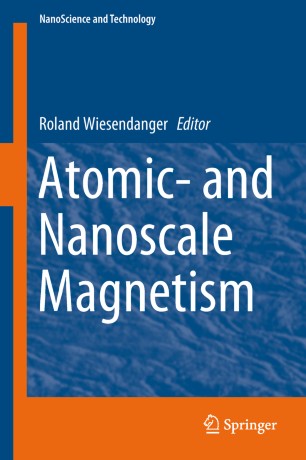 This book provides a comprehensive overview of the fascinating recent developments in atomic- and nanoscale magnetism, including the physics of individual magnetic adatoms and single spins, the synthesis of molecular magnets for spintronic applications, and the magnetic properties of small clusters as well as non-collinear spin textures, such as spin spirals and magnetic skyrmions in ultrathin films and nanostructures.

Starting from the level of atomic-scale magnetic interactions, the book addresses the emergence of many-body states in quantum magnetism and complex spin states resulting from the competition of such interactions, both experimentally and theoretically. It also introduces novel microscopic and spectroscopic techniques to reveal the exciting physics of magnetic adatom arrays and nanostructures at ultimate spatial and temporal resolution and demonstrates their applications using various insightful examples. The book is intended for researchers and graduate students interested in recent developments of one of the most fascinating fields of condensed matter physics.

Roland Wiesendanger studied physics at the University of Basel, Switzerland, where he received his Ph.D. in 1987 and his habilitation degree in 1990, working in the field of scanning tunnelling microscopy and related techniques. In 1992 he accepted a Full Professor position at the University of Hamburg, related to the launch of the Microstructure Advanced Research Center Hamburg. In Hamburg, Roland Wiesendanger initiated the Center of Competence in Nano-scale Analysis, the Interdisciplinary Nanoscience Center Hamburg, the Collaborative Research Center of the German Research Foundation entitled "Magnetism from single atoms to nanostructures", and the Free and Hanseatic City of Hamburg Cluster of Excellence "Nanospintronics".

Since the late 80s, Roland Wiesendanger has pioneered the technique of spin-polarized scanning tunnelling microscopy (SP-STM) and spectroscopy, which allowed the first real-space observation of magnetic structures at the atomic level. He also contributed significantly to the development of magnetic force microscopy (MFM) and magnetic exchange force microscopy (MExFM).