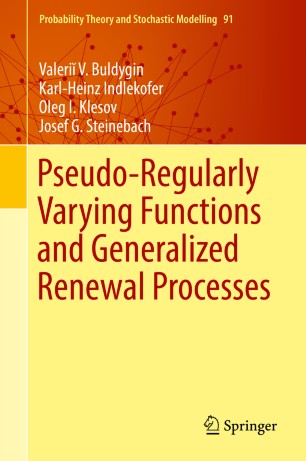 One of the main aims of this book is to exhibit some fruitful links between renewal theory and regular variation of functions. Applications of renewal processes play a key role in actuarial and financial mathematics as well as in engineering, operations research and other fields of applied mathematics. On the other hand, regular variation of functions is a property that features prominently in many fields of mathematics.

The structure of the book reflects the historical development of the authors’ research work and approach – first some applications are discussed, after which a basic theory is created, and finally further applications are provided. The authors present a generalized and unified approach to the asymptotic behavior of renewal processes, involving cases of dependent inter-arrival times. This method works for other important functionals as well, such as first and last exit times or sojourn times (also under dependencies), and it can be used to solve several other problems. For example, various applications in function analysis concerning Abelian and Tauberian theorems can be studied as well as those in studies of the asymptotic behavior of solutions of stochastic differential equations. The classes of functions that are investigated and used in a probabilistic context extend the well-known Karamata theory of regularly varying functions and thus are also of interest in the theory of functions.

The book provides a rigorous treatment of the subject and may serve as an introduction to the field. It is aimed at researchers and students working in probability, the theory of stochastic processes, operations research, mathematical statistics, the theory of functions, analytic number theory and complex analysis, as well as economists with a mathematical background. Readers should have completed introductory courses in analysis and probability theory.