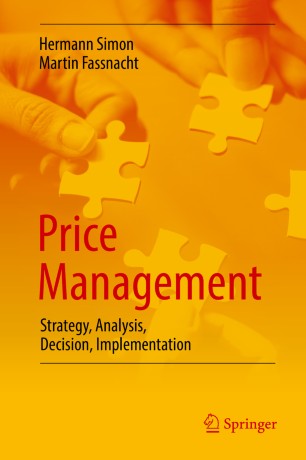 In this book, the world’s foremost experts on pricing integrate theoretical rigor and practical application to present a comprehensive resource that covers all areas of the field. This volume brings together quantitative and qualitative approaches and highlights the most current innovations in theory and practice.

Going beyond the traditional constraints of “price theory” and “price policy,” the authors coined the term “price management” to represent a holistic approach to pricing strategy and tactical implementation.  They remind us that the Ancient Romans used one word, pretium, to mean both price and value.  This is the fundamental philosophy that drives successful price management where producer and customer meet.  Featuring dozens of examples and case studies drawn from their extensive research, consulting, and teaching around the world, Simon and Fassnacht cover all aspects of pricing following the price management process with its four phases: strategy, analysis, decision, and implementation. Thereby, the authors take into account the nuances across industry sectors, including consumer goods, industrial products, services, and trade/distribution. In particular, they address the implications of technological advancements, such as the Internet and new measurement and sensor technologies that have led to a wealth of price management innovations, such as flat rates, freemium, pay-per-use, or pay-what-you-want. They also address the emergence of new price metrics, Big Data applications, two-sided price systems, negative prices, and the sharing economy, as well as emerging payment systems such as bitcoin.

The result is a “bible” for leaders who recognize that price is not only a means to drive profit in the short term, but a tool to generate sustained growth in shareholder value over the longer term, and a primer for researchers, instructors, and students alike.

Hermann Simon is the founder and honorary chairman of Simon-Kucher & Partners, the world’s leading price consultancy. Ranked on the Thinkers50 list of the most influential international management thinkers, he is considered the world’s leading authority on pricing.

Simon has published over 35 books in 27 languages, including the worldwide bestsellers Hidden Champions, Confessions of the Pricing Man, Power Pricing, and Manage for Profit, Not for Market Share. From 1995 to 2009 he served as CEO of Simon-Kucher & Partners. He has advised many of the world’s leading companies, and has served as a board member of foundations and corporations.

Before committing himself entirely to management consulting, Simon was a professor of business administration and marketing at the Universities of Mainz (1989-1995) and Bielefeld (1979-1989). His visiting professorships include Harvard Business School, Stanford, London Business School, INSEAD, Keio University in Tokyo, and the Massachusetts Institute of Technology.

He has served on the editorial boards of numerous business journals, including the International Journal of Research in Marketing, Management Science, Recherche et Applications en Marketing, Décisions Marketing, and European Management Journal. He was also president of the European Marketing Academy (EMAC).

Simon studied economics and business administration at the Universities of Cologne and Bonn, where he received degrees in economics and earned his Ph.D. in management science. He has received many international awards and three honorary doctorates. He is honorary professor at the University of International Business and Economics in Beijing and the Hermann Simon Business School in China has been named in his honor.

Martin Fassnacht is the Otto Beisheim Chaired Professor of Marketing and Commerce at the WHU – Otto Beisheim School of Management in Düsseldorf, Germany. He ranks as one of Germany’s most influential economists. Under the motto “We Inspire Marketing,” he and his team at WHU generate fresh ideas for research, practice, and teaching in price management, retail marketing, and brand management. He serves as a strategic advisor to consumer goods manufacturers and retailers, and he and his team conduct projects in cooperation with partners from industry and trade. He is also the author of numerous publications in international peer-reviewed journals and magazines.

Fassnacht is the scientific director of the Center for Market-Oriented Corporate Management at WHU and the academic director of WHU’s MBA program. He is the chairman of the Advisory Board of the Henkel Center for Consumer Goods (HCCG) at WHU.