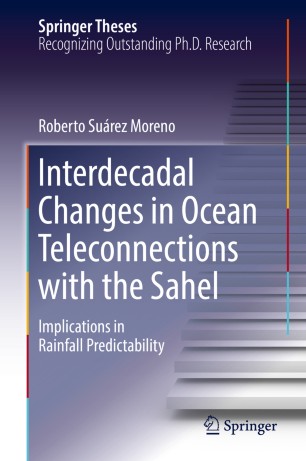 Interdecadal Changes in Ocean Teleconnections with the Sahel

In tropical latitudes, monsoons trigger regimes of strong seasonal rainfall over the continents. Over the West African region, the rainfall has shown a strong variability from interannual to decadal time scales. The atmospheric response to global sea surface temperatures is the leading cause of rainfall variability in the West African Sahel. This thesis explores changes in the leading ocean forcing of Sahelian rainfall interannual variability. It analyzes the dynamical mechanisms at work to explain the non-stationary sea surface temperature-forced response of anomalous rainfall. The underlying multidecadal sea surface temperature background is raised as a key factor that favors some interannual teleconnections and inhibits others. Results of this thesis are relevant for improving the seasonal predictability of summer rainfall in the Sahel.

Roberto Suárez has been a postdoctoral researcher at University Complutense of Madrid since July 2017. He received his bachelor’s degree in physics from the University Autónoma of Madrid in September 2010 and completed his master’s degree in Meteorology and Geophysics at the University Complutense of Madrid in June 2012. He received his doctorate from University Complutense of Madrid in June 2017 for his research on climate variability in the West African Sahel, conciliating both statistical methods and numerical models to improve rainfall predictability in this region. He recently investigated the potential modulations of interannual sea surface temperature-forced teleconnections of Sahelian rainfall by the global ocean background state, using observations and general circulation models. He has found how the Mediterranean Sea is becoming a leading factor due to its growing impact on monsoonal Sahelian rainfall during recent decades. In this framework, he is currently studying the underlying causes for the strengthening of the Mediterranean-Sahel atmospheric teleconnection,in which the inter-tropical convergence zone plays a fundamental role.