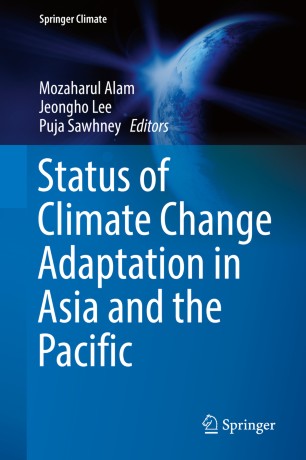 Status of Climate Change Adaptation in Asia and the Pacific

This volume provides an overview of the climate change adaptation objectives set, actions taken, and challenges faced by several countries in the Asia-Pacific region. The majority of the populations in this region struggle to make a living from subsistence agriculture, and livelihoods are highly dependent on natural ecosystem services which are likely to be severely affected by climate change. Cases discussed in this book highlight successes made by governments towards achieving adaptation objectives, and efforts required to overcome challenges.

While significant economic advances have been made, the pace of growth has been slow to impact the lives of a majority of the people who live below the poverty line. The chapters highlight adaptation actions for protecting people and their livelihoods in priority sectors, maintaining food and water security, supporting socio-economic stability including poverty reduction, and climate risk management. This book also maximizes readers' insights into the knowledge gaps and limitations of stated adaptation goals, and the bottlenecks that hinder implementation in different regions.

Mozaharul Alam is the Regional Coordinator of Climate Change Programme of UN Environment Asia and the Pacific Office. He has obtained M. Sc. degree in Geography from Jahangirnagar University in Bangladesh. He has received an international fellowship award on climate change by International Institute for Environment and Development (IIED), London, UK. He has served the Ministry of Environment and Forests, Government of Bangladesh as National Project Coordinator for formulating National Adaptation Programme of Action (NAPA). He has also worked as one of the Lead Authors for Working Group II for IPCC Fifth Assessment Report.

Jeongho Lee is a Senior Research Fellow, Center for International Cooperation at Korea Environment Institute (KEI). He had received his PhD degree from the School of Earth and Environmental Sciences, Seoul National University in Korea. He started his environmental research careers at KEI, and he had served Korea Adaptation Center for Climate Change as Director and Head. He has several years of experience working on climate change impacts and vulnerability assessment and national climate change adaptation strategies in Korea.