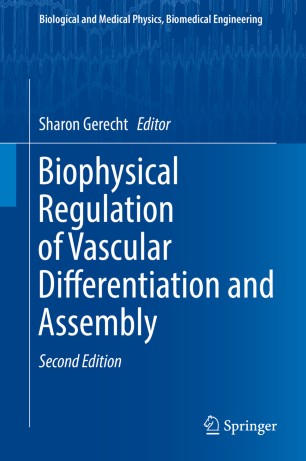 This book updates and expands on various aspects of the vasculature’s microenvironment and how these regulate differentiation and assembly. Discussed in this new edition are efforts to capitalize on combining engineering techniques, to study and manipulate various biophysical cues, including: endothelial cell-pericyte interactions (Davis), mechanical forces to regulate vascularization in three-dimensional constructs (Levenberg), how matrix properties and oxygen tension regulate vascular fate and assembly (Gerecht), biophysical cues in relation to vascular aging (Ferreira), 3D printing of complex vascularized tissue (Hibino), the harnessing of biophysical cues for therapeutic vasculature interfacing with the damaged brain (Segura) and finally, the infarcted heart (Grayson).

This second edition of Biophysical Regulation of Vascular Differentiation and Assembly provides an interdisciplinary view of vasculature regulation through various biophysical cues and presents recent advances in measuring and controlling such parameters. This book will be of interest to biologists, biophysicists and engineers who work with vascular differentiation and assembly.

Dr. Gerecht earned bachelor’s and doctoral degrees from the Technion - Israel Institute of Technology. Following a postdoctoral training at MIT, she joined Chemical and Biomolecular Engineering at Johns Hopkins in 2007, with a joint appointment in the Department of Materials Science and Engineering. Since 2017, she is the Director of the Institute for NanoBioTechnology at  Johns Hopkins.
Dr. Gerecht’s research group focuses on the interactions between stem or cancer cells and their microenvironments to engineer artificial niches capable of guiding vascular cell decisions. The long-term goal of her research is to identify and design therapeutics for regenerative medicine and cancer.
Dr. Gerecht is the recipient of the Allan C. Davis Medal from the Maryland Academy of Sciences (2008), the North America Vascular Biology Organization Junior Investigator Award (2009), the Basil O’Connor Starter Scholar Research Award from the March of Dimes Foundation (2009-2011), the National Scientist Development Award (2008-2012) and Established Investigator Award (2014-2019) both from the American Heart Association, the National Science Foundation CAREER award (2011-2016), the W.W. Smith Charitable Trust Heart award (2014-2017), and the JHU Inaugural President’s Frontier Award (2015). Dr. Gerecht is an elected Fellow of the American Institute for Medical and Biological Engineering (2016). She is the author of more than 150 papers, book chapters, and patents in her field. Dr. Gerecht is a co-founder of Gemstone Biotherapeutics, LLC, a spin-off company based on technologies developed in her lab, focusing on wound healing.