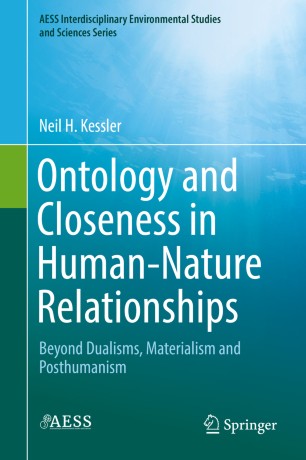 Ontology and Closeness in Human-Nature Relationships

Beyond Dualisms, Materialism and Posthumanism

In Ontology and Closeness in Human-Nature Relationships, Neil H. Kessler identifies the preconceptions which can keep the modern human mind in the dark about what is happening relationally between humans and the more-than-human world.  He has written an accessible work of environmental philosophy, with a focus on the ontology of human-nature relationships.  In it, he contends that large-scale environmental problems are intimate and relational in origin.  He also challenges the deeply embedded, modernist assumptions about the relational limitations of more-than-human beings, ones which place erroneous limitations on the possibilities for human/more-than-human closeness. Diverging from the posthumanist literature and its frequent reliance on new materialist ontology, the arguments in the book attempt to sweep away what ecofeminists call “human/nature dualisms.  In doing so, conceptual avenues open up that have the power to radically alter how we engage in our daily interactions with the more-than-human world all around us.

Given the diversity of fields and disciplines focused on the human-nature relationship, the topics of this book vary quite broadly, but always converge at the nexus of what is possible between humans and more-than-human beings.  The discussion interweaves the influence of human/nature dualisms with the limitations of Deleuzian becoming and posthumanism’s new materialism and agential realism.  It leverages interhuman interdependence theory, Charles Peirce’s synechism of feeling and various treatments of Theory of Mind while exploring the influence of human/nature dualisms on sustainability, place attachment, common worlds pedagogy, emergence, and critical animal studies.  It also explores the implications of plant electrical activity, plant intelligence, and plant “neurobiology” for possibilities of relational capacities in plants while even grappling with theories of animism to challenge the animate/inanimate divide.  The result is an engaging, novel treatment of human-nature relational ontology that will encourage the reader to look at the world in a whole new way.