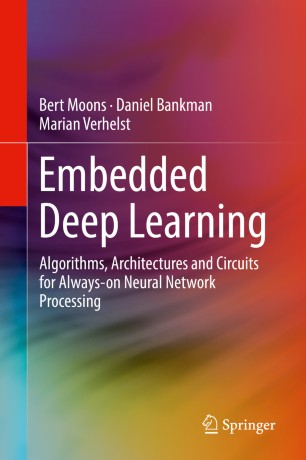 Dr. ir. Bert Moons received the B.S. and M.S. and PhD degree in Electrical Engineering from KU Leuven, Leuven, Belgium in 2011, 2013 and 2018. He performed his PhD research at ESAT-MICAS as an IWT-funded Research Assistant, focusing on energy-scalable and run-time adaptable digital circuits for embedded Deep Learning applications. Bert authored 15+ conference and journal publications, was a Visiting Research Student at Stanford University in the Murmann Mixed-Signal Group and received the SSCS predoctoral achievement award in 2018.  Currently he is with Synopsys, as a hardware design architect for the DesignWare EV6x Embedded Vision and Deep Learning processors.

Daniel Bankman received the S.B. degree in electrical engineering from the Massachusetts Institute of Technology, Cambridge, MA in 2012 and the M.S. degree from Stanford University, Stanford, CA in 2015. Since 2012, he has been working toward the Ph.D. degree at Stanford University, focusing on mixed-signal processing for machine learning. He has held internship positions with Analog Devices and Intel. His research interests include algorithms, architectures, and circuits for energy-efficient learning and inference in smart devices. He was a recipient of the Texas Instruments Stanford Graduate Fellowship in 2012, the Numerical Technologies Founders Prize in 2013, and the John von Neumann Student Research Award in 2015 and 2017.

Prof. Dr. ir. Marian Verhelst is a professor at the MICAS laboratories (MICro-electronics And Sensors) of the Electrical Engineering Department of KU Leuven. Her research focuses on embedded machine learning, energy-efficient hardware accelerators, self-adaptive circuits and systems, and low-power sensing and processing. Before that, she received a PhD from KU Leuven cum ultima laude, she was a visiting scholar at the Berkeley Wireless Research Center (BWRC) of UC Berkeley, and she worked as a research scientist at Intel Labs, Hillsboro OR. Prof. Verhelst is a member of the DATE conference executive committee, and was a member of the ESSCIRC and ISSCC TPCs and of the ISSCC executive committee. Marian is an SSCS Distinguished Lecturer, was a member of the Young Academy of Belgium, an associate editor for TCAS-II and JSSC and a member of the STEM advisory commitee to the Flemish Government. Marian holds a prestigious ERC Grant from the European Union.