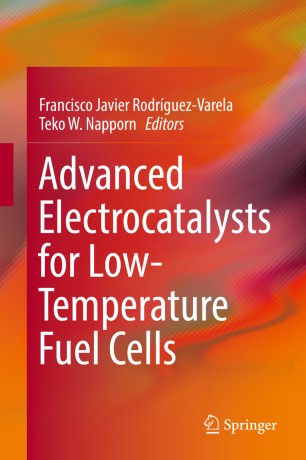 This book introduces the reader to the state of the art in nanostructured anode and cathode electrocatalysts for low-temperature acid and alkaline fuel cells. It explores the electrocatalysis of anode (oxidation of organic molecules) and cathode (oxygen reduction) reactions. It also offers insights into metal-carbon interactions, correlating them with the catalytic activity of the electrochemical reactions.

The book explores the electrocatalytic behaviour of materials based on noble metals and their alloys, as well as metal-metal oxides and metal-free nanostructures. It also discusses the surface and structural modification of carbon supports to enhance the catalytic activity of electrocatalysts for fuel-cell reactions.

Prof. Dr. Francisco Javier Rodríguez-Varela is Full Professor at the Center for Research and Advanced Studies (Cinvestav), Saltillo Campus, Mexico. He obtained his Master degree in Solar Energy from the National University of Mexico (UNAM) in 1998, and his PhD in Metallurgical Engineering and Electrochemistry from École Polytechnique de Montréal (Canada) in 2004. His PhD thesis focused on the development of anode electrocatalysts for Direct Propane Fuel Cells. Then, he joined the Chemical Engineering Department of École Polytechnique de Montréal as a post-doctoral fellow (2004-2005). Since January of 2006, Dr. Rodríguez-Varela is a Researcher at Cinvestav Saltillo Campus (Full Professor since 2009). At Cinvestav, he has worked in the development and characterization of nanostructured anode and cathode electrocatalysts for PEMFCs, DAFCs and MFCs. He has served as President of the Mexican Hydrogen Society (2012-2014) and Coordinator of the Mexican Hydrogen Network (2015). Member of the Scientific Committee of Journal of New Materials for Electrochemical Systems (2007-to date) and Guest Editor of the same journal (2008-2013). Guest Editor of Journal of Applied Electrochemistry (2015). Dr. Rodríguez-Varela has been Principal Investigator of several national research projects and two bilateral international projects with China and India, funded by the Mexican National Council for Science and Technology (CONACyT).
Prof. Dr. Teko W. Napporn is a tenured researcher of French National Center of Scientific Research (CNRS), working at  the Poitiers Institute of Materials and Environmental chemistry (IC2MP). He received his Master's degree in Applied Chemistry in 1991, and his PhD in Electrochemistry in 1997 from the University of Poitiers (France). During his PhD thesis, he developed anode materials for direct methanol fuel cell. After his PhD, he joined the Electrocatalysis group at University of São Paulo at São Carlos, Brazil, as a post-doctoral fellow and later in 1999, the École Polytechnique de Montreal (Canada) as research associate. There, he had studied and developed the single chamber SOFC system in collaboration with Hydro-Quebec. Since 2008 he got a tenure position at CNRS for developing novel nanomaterials for electrocatalysis especially for application in energy conversion and storage systems. His recent research topics are focused on (i) morphology and size controlled nanomaterials as novel electrodes for fuel cell and water electrolyzer (acid and alkaline media); (ii) oxygen reduction reaction and oxygen evolution reaction; (iii) full porous single chamber SOFC. Since September 2015, he is Adjunct professor at the Chemistry of Hydrogen energy conversion unit of the Institute of Advanced Science of Yokohama National University in Japan.