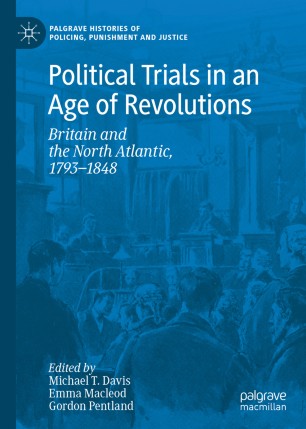 Political Trials in an Age of Revolutions

Part of the Palgrave Histories of Policing, Punishment and Justice book series (PHPPJ)

This collection provides new insights into the ’Age of Revolutions’, focussing on state trials for treason and sedition, and expands the sophisticated discussion that has marked the historiography of that period by examining political trials in Britain and the north Atlantic world from the 1790s and into the nineteenth century. In the current turbulent period, when Western governments are once again grappling with how to balance security and civil liberty against the threat of inflammatory ideas and actions during a period of international political and religious tension, it is timely to re-examine the motives, dilemmas, thinking and actions of governments facing similar problems during the ‘Age of Revolutions’.

The volume begins with a number of essays exploring the cases tried in England and Scotland in 1793-94 and examining those political trials from fresh angles (including their implications for legal developments, their representation in the press, and the emotion and the performances they generated in court). Subsequent sections widen the scope of the collection both chronologically (through the period up to the Reform Act of 1832 and extending as far as the end of the nineteenth century) and geographically (to Revolutionary France, republican Ireland, the United States and Canada). These comparative and longue durée approaches will stimulate new debate on the political trials of Georgian Britain and of the north Atlantic world more generally as well as a reassessment of their significance. This book deliberately incorporates essays by scholars working within and across a number of different disciplines including Law, Literary Studies and Political Science.

Michael T. Davis is Senior Lecturer in the School of Humanities at Griffith University, Australia.

Emma Macleod is Senior Lecturer in History at the University of Stirling, Scotland.

Gordon Pentland is Reader in History in the School of History, Classics and Archaeology at the University of Edinburgh, Scotland.

“Political Trials offers a range of refreshing new perspectives that establish the courtroom as a place of political importance, track the evolution of political crime and exhibit how nations and individuals reacted to the experiences of revolution. It will be a useful and welcome book for anyone researching crime or political thought during this period.” (Joshua Dight, Journal for Eighteenth-Century Studies, April 14, 2021)