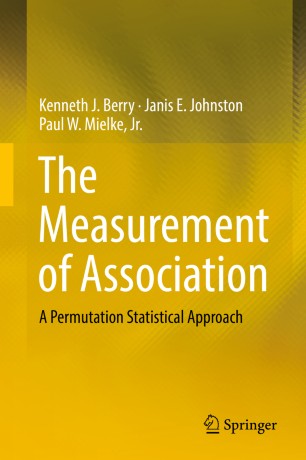 The Measurement of Association

Unlike classical statistical methods, permutation statistical methods do not rely on theoretical distributions, avoid the usual assumptions of normality and homogeneity of variance, and depend only on the data at hand. This book takes a unique approach to explaining statistics by integrating a large variety of statistical methods, and establishing the rigor of a topic that to many may seem to be a nascent field. This topic is relatively new in that it took modern computing power to make permutation methods available to those working in mainstream research.

Janis E. Johnston works for the U.S. Government as a data analyst. She received B.S. degrees in mathematics and natural science from the University of Wyoming, her M.A. in sociology from the University of Wyoming, and her Ph.D. from Colorado State University. From 2007 to 2009 she was an American Association for the Advancement of Science, Science & Technology fellow and began government service after the fellowship. Her research interests are in permutation methods, statistical inference, and policy analysis.