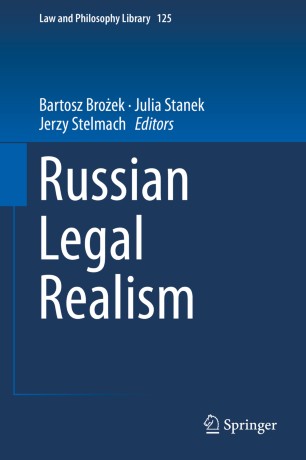 This edited volume explores ideas of legal realism which emerge through the works of Russian legal philosophers. Apart from the well-known American and Scandinavian versions of legal realism, there also exists a Russian one: readers will discover fresh perspectives and that the collection of early twentieth century ideas on law discussed in Russia can be understood as a unified school of legal thought – as Russian legal realism.

These chapters by renowned European and Eastern European legal philosophers add to ongoing discussions about the nature of law, especially in the context of developments around our scientific knowledge about the mind and behaviour. Analyses of legal phenomena carried out by legal realists in Russia offer novel arguments in favour of embracing psychological and sociological perspectives on the law. The book includes analysis of the St. Petersburg school of legal philosophy and Leon Petrażycki’s psychological theory of law.

This original and multifaceted research on Russian realists is of considerable value to an international audience. Researchers and postgraduate students of law, legal theory and legal ethics will find the book particularly appealing, but it will also interest those investigating the philosophy or sociology of law, or legal history.

Bartosz Brożek is full professor at the Department of the Philosophy of Law and Legal Ethics and deputy-dean of the Faculty of Law and Administration, Jagiellonian University in Kraków, as well as Deputy-Director of the Copernicus Center for Interdisciplinary Studies.

Julia Stanek is a researcher in the area of Russian legal philosophy, bioethics and legal philosophy in general, the author of several publications and book on Russian Legal Realism.

Jerzy Stelmach is full professor and the Head of the Department of the Philosophy of Law and Legal Ethics, Jagiellonian University in Kraków, an experienced researcher in the areas of legal philosophy, law & logic, ethics, and philosophy in general; the author, co-author, or editor of more than a dozen books and mo nographs.