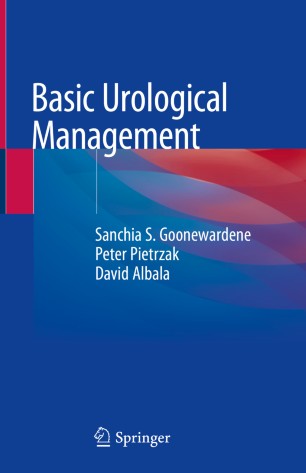 This book describes basic urological conditions and their management, with flowcharts to illustrate each step of patient treatment. Topics related to the upper and lower tract, urological infections, trauma, incontinence, andrology, and uro-oncology are all covered. The management of each condition is explained through point by point analysis that details patient pathways.

Sanchia S. Goonewardene MBChB (Hons.Clin.Sc), BMedSc(Hons), PGCGC, Dip.SSc, MRCS (Ed and Eng). Sanchia Goonewardene qualified from Birmingham Medical School with Honours in Clinical Science. After that she completed her Foundation training at the Royal Centre for Defence Medicine. Her Core General Surgery training was completed in Coventry and Warwickshire. She has worked as Urology Registrar at Guys and St Thomas Hospitals and the Royal Free and UCL and  has over 370 publications to her name. She has significantly contributed to the Urological Academic World with her first two books, Core Surgical Procedures for Urology Trainees and Prostate Cancer Survivorship  -- she has since added a section to EAU on Prostate Cancer Survivorship and Supportive Care, is an associate member of an EAU guidelines panel  and has currently been given her first editorial board position.

David M. Albala graduated with a geology degree from Lafayette College in Easton, Pennsylvania. He completed his medical school training at Michigan State University and went on to complete his surgical residency at the Dartmouth-Hitchcock Medical Center. Following this, Dr. Albala was an endourology fellow at Washington University Medical Center under the direction of Ralph V. Clayman. He practiced at Loyola University Medical Center in Chicago and rose from the ranks of Instructor to full Professor in Urology and Radiology in eight years. After 10 years, he became a tenured Professor at Duke University Medical Center in North Carolina. At Duke, he was Co-Director of the Endourology fellowship and Director for the Center of Minimally Invasive and Robotic Urological Surgery. He has over 150 publications in peer-reviewed journals and has authored three textbooks in endourology and one in general urology. He serves on the editorial board for the Journal of Robotic Surgery, Journal of Endourology, Current Opinions in Urology and Urology Index and Reviews. He serves as a reviewer for eight surgical journals. At the present time he is Chief of Urology at Crouse Hospital in Syracuse, New York and Medical Director for Associated Medical Professionals. He is considered a national and international authority in laparoscopic and robotic urological surgery and has been an active teacher in this area for over 20 years. His research and clinical interests have focused on robotic urological surgery. In addition, other clinical interests include minimally invasive treatment of benign prostatic hypertrophy (BPH) and the use of fibrin sealants in surgery. He has been a Visiting Professor at numerous institutions across the United States as well as oversea  s in countries such as India, China, Iceland, Germany, France, Japan, Brazil, Australia, and Singapore. In addition, he has done operative demonstrations in over 32 countries and 23 states.